Not new. Not American. Not garden.

Michael King’s recent blog post entitled Never New Gardening had me stewing for quite some time before responding.  He and I agree on one thing: that titles for garden trends will ultimately incite a downward spiral, ensuring that what begins by getting an increasing groundswell of support will almost certainly feel the sting of going out of favor.

King  writes that the inspired philosophy behind the 1980’s New American Garden and its successors, the Dutch Wave and the New Perennials Movements, combined traditional landscape features with bold and ecologically aware planting combinations.   He lauds the use of native species in highly designed spaces, and refers to his excellent earlier description of The Netherlands’ heemparken, which were created not as conservation areas, but rather to instill an appreciation for native species through stylized plantings. 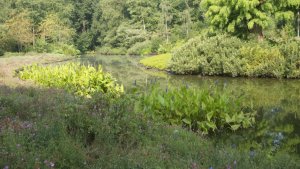 Yet King concludes that the integrity of those philosophies has devolved into a paintbox of plants that have lost their site sensitivity.  This description of the sad current state of affairs evokes a chain store feel to the current use of the plants and the designs.  He declares, “Nobody talks about the New American Garden anymore.”

Not only DO people still talk about this design philosophy, they want to hear about it and understand its roots in art, architecture, industry, and ecology.  They want to examine how a new generation of talented designers is putting their distinctive spin on it.  I opened  a lecture I gave at the New York Botanical Garden, titled The New American Garden, with the provocative statement that the New American Garden was not new, nor strictly American, and encompassed more than the traditional garden.  People were very receptive.  They got it, and it excited them.  Designers are eager to contribute to refine and explore the practices promoted in the not-new, not-American not-garden tradition.

King’s analysis ends with this defeatist statement: “Gardening is not landscape architecture nor nature conservation. It is a form of aesthetic self expression and any attempts to afford it greater worthiness by applying unnecessary credentials of ecological merit are dishonest.”

The New American/New Perennials projects that are the most outstanding combine all four of these words.  Landscape, because they distill the essence of a place and display it in a way that is evocative and compelling.  Architecture, because their constructed shapes accent relationships to the buildings and the naturally occurring elements that surround it.  Nature, because they strengthen a viewer’s connection with the often overlooked and underappreciated drama of the changing flora and fauna that exist around us.  And conservation, because at its most successful, a garden inspires us to have a deeper connection, a greater understanding, and a more serious commitment to providing stewardship in the continued good health of the landscapes that define where we live.

Now get out there and grow something.  Get wild.