If Native Plant Society of New Jersey president Kathy Salisbury could have just one native plant for her yard it would be Pycnanthemum muticum. Why? Because, as she says, “it undulates with insects. It is a mystery to me why it attracts so many different types of insects. It absolutely vibrates with activity while showier flowers stand by hardly noticed at all.”

Wasps and bees alike enjoy the offerings of Mountain Mint

Kathy goes on to tell us of the Mountain Mint planted near the front door of her residence and how friends refused to use the front door because of the gauntlet of insects they had to pass through before entering her home. Sure, one person was allergic to bees and would end up hospitalized if stung, but others just wouldn’t go near the plantings out of fear of the unknown. They were scared of or repulsed by the bugs even though they didn’t even know what they were!

That got us wondering why the fear/disgust of insects and why is is that some will handle certain insects (ladybugs, butterflies) without reservation while swatting and squishing other insects?

Ladybugs, cute as they are, are ravenous meat eaters. They are beneficials in the garden eating a wide variety of garden pests and are even introduced into commercial production to help control soft-bodied insects like mealybugs, scale and aphids.

Innocent looking enough – Ladybugs eating their living prey head-first! Think about that the next time you let one crawl on your hand!

The ladybug larva eats even more than the adults. But if you watch a video of a ladybug eating a living aphids head-first you may second guess your decision to let the cutie crawl up your arm. We are not saying its not perfectly safe to do that – we are just saying the more information you have about insects, or the more information you can share with your clients, the more welcome the diversity of 6-legged insects native plantings bring to the landscape will be, beyond the ladybug, monarch and honeybee.

We encourage everyone to let ladybugs explore their hands and arms for aphids. Just as a bee flies away when it realizes you have no nectar to give, eventually the ladybug will realize there is nothing there for them to eat and will fly off, perhaps to an aphid buffet at the local milkweed plant.

Afraid of Bugs? Blame your parents!

Perhaps it is because some of our first known interactions with insects are those that annoy or hurt us – mosquitos, ticks, wasps, bees and flies all make the list of insects most of us can recognize and most of us try to kill when they are in our vicinity. These are the ones we first learn about watching our parents or caretakers, taking care of the house pests, swatting the insects away from vulnerable children. Early on we learn that insects are annoying, may cause harm, may ruin food and need to be destroyed. If you are curious just what it is about insects that repulses us humans, you may want to check out Jeffrey Lockwood’s Book – The Infested Mind: Why Humans Fear, Loathe and Love Insects.  As Mr. Lockwood points out, how a person responds to insects tends to manifest itself at a young age based on the parents response to insects.

Large Black Ground Beetles like this one, start off as grubs in the garden, then emerge as beneficial garden helpers.

We asked Kathy why she thinks she is fascinated rather than repelled by insects. She attributes her point of view to parents who, rather than kill insects when they caused pain or damage, captured them for the children to take a closer look. Parents who brought out the field guides to figure out exactly what caterpillar that was that stung you (Saddleback AND Io moth caterpillars hurt!) and then released them with the understanding that these insects were just defending themselves from attack, they weren’t attacking. Parents who encouraged an understanding that the caterpillar is food for other animals and is important and valuable even though it stung. Parents who allotted a certain percentage of the vegetable garden and orchard to feeding insects and parents who didn’t immediately run for the ant killer or flyswatter. She says her parents ingrained in her a sense of curiosity of the nature world rather than a fear of it.

Many gardeners have realized that some insects cause harm to the plants in the garden while others pollinate and still others control the harmful populations. What we need, as a society, to do is to become more aware of the micro-world around us. We need to understand the connection between the insects and the songbirds, the insects and our food, the insects and the fish, the insects and the decomposition process that keeps us from being buried in the rot of everything that was once living.

There are gardeners who reach for the insecticide the moment they see an insect on their prized plants even before identification is made. This is often to the detriment of the garden balance that had, up to that point, been keeping a wide variety of insect pests at bay.  Let’s start investigating what insects are actually doing instead of assuming they are causing problems. Instead of reaching for the spray when we see a spotted cucumber beetle, we need to start wondering what in the world the cucumber beetle is doing in a rose! 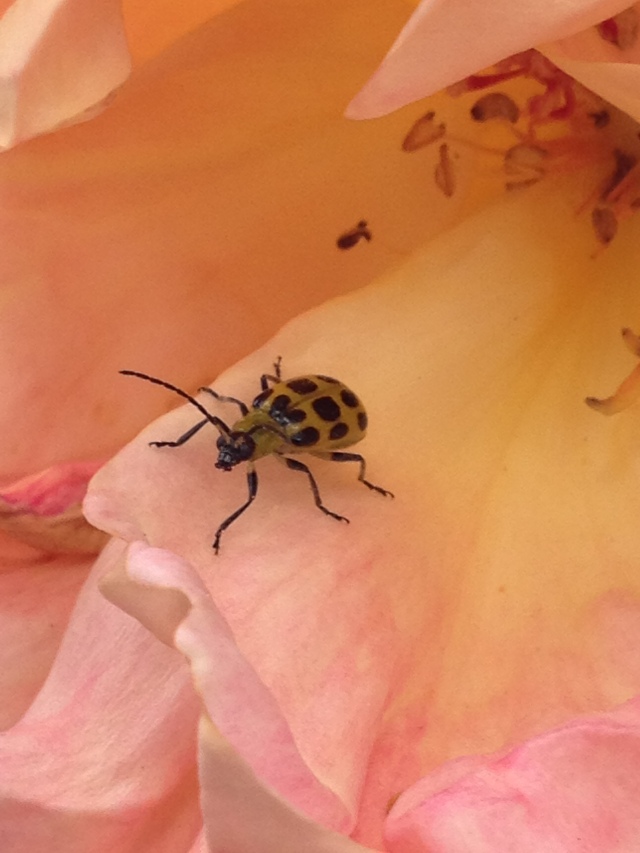 Spotted cucumber beetle on a rose

All Insects are interesting and have a role to play in our ecosystem.

The public needs to get past superficial pop-culture science education. While we think it is terrific that Monarch Butterflies and Honey Bees are making the news and because of this the public is starting to think more about where their food comes from and where the insects in their gardens travel to during the cold winter months (well, they think about that for monarchs at least) we wish people would start getting curious about the other 6-legged critters in their yards and homes.

We know that when some people learn that their landscape designer, or their significant other, wants to plant native plants or a habitat garden, they balk at the insects those plants will attract. They are nervous the insects will eat their plants, sting their family, make their way into their homes. And some or all of this may just happen. But the reason we are planting native plants is to make sure we are contributing to that natural system. we are ensuring food for insects to eat so that other wildlife has insects to eat. Sure they may make us uncomfortable, but when that happens, let’s take a step back and look at the bigger picture.

So while we encourage the monarchs and honeybees to our garden, let’s not forget to welcome the night flying moths that pollinate night-blooming flowers, the beneficial wasps that lay their eggs in the caterpillars that eat our tomato leaves and the scale insects that suck the life from our ornamentals and the flies that lay their eggs inside grasshoppers, caterpillars and beetles. Let’s plant for the beneficials, let’s strive for balance and let’s create a stage in our garden to let the drama of the insect world play out.

If you are looking to attract those beneficials to your landscape, in order to control some insects that have gotten out of control while adding some drama to the microworld in the garden – in addition to Mountain Mint (we have three varieties of Pycnanthemum) you may want to try planting some plants in the Apiaceae family. These plants, with their clusters of small flowers, seem to attract more than their fair share of fascinating beneficials. Plant some Golden Alexanders, some Yarrow,  and a few Rattlesnake Masters for many seasons of intriguing insect activity and important life lessons for all who visit. 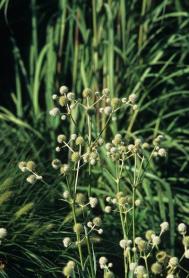 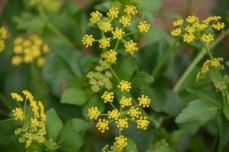